Trianix Alpha is a fictional character and third party Transformer homage to Diaclone Dia-Battles and the Decepticon Stormbringer made by FansProject.

Trianix Alpha is a third party Transformer homage to Diaclone Dia-Battles and the Decepticon Stormbringer.

Toy Reviewer Peaugh mentioned he saw concept art of Trainix Alpha at TFcon 2013. In that art it was called Steel Core 2.[1]

A teaser for Three Kings appears on the last page of the instructions for Riftshot Core, where he was listed as release WB006.

Images of Trianix Alpha were included in the TFcon USA Third Party Panel in October 2015.[2]

In February 2016 FPCore started a contest to count the Solerons to win a Trainix Alpha figure.

The A3U Review episode for February 4th, 2016 had a segment that looked at the Trianix Alpha test shot.[4]

There are few that could claim more humble beginnings than Melix, Balthazar, and Gasper.

They were three ordinary Solerons who worked to terraform planetoids for Crystal synthesis, a respected profession but far from glamorous. It was the early days of the Horde incursions, when the black swarm was more rumor than daily threat, that the colony on Xeven 11 was attacked. With the first volley of attackers the Warbot security was lost, leaving a planet of engineers and crystal gardeners - mostly Solerons - to fend off an enemy unlike anything seen in recorded memory. The slaughter that followed as the crystals were harvested both raw and direct from the fallen Alphas is still used to imprint the severity of The Horde to cadets.

Seeing the inexorable advance of the swarm and realizing that The Horde would wipe out the population long before any help arrived, an engineer named Melix led his friends and fellow workers Balthazer and Gasper - equipped only with their unarmed construction vehicles - out to face the enemy. The rush of defiance by the Soleron workers stopped The Horde's advancement, perhaps it was shock or confusion that caused The Horde to flinch that day, but as they faced their small opponents wielding oversized weapons scavenged from the fallen, along with hastily weaponized tools and vehicles, The Horde split from formation and fled for the only time in recorded history.

Melix, Bathazar, and Gasper each leading their own group of workers, fought off the Horde until all that remained was those still tearing apart the heart of the colony, inside the revered Chrysalis Chamber. A fierce battle commenced. The Chrysalis Siege as it is now known was as memorable a battle that has ever been fought by any in The Core, and against innumerable odds. When the day was done The Horde was gone, leaving only a small fraction of the Soleron workers, exhausted, but alive and victorious.

The story could have ended there but The Alpha Council insisted on honoring these three heroes that represented the best the Alpha core could produce. Given the opportunity to be the first Solerons ever to be inducted into the Warbot ranks, the three were placed into an experimental program called “Project Trianix”, designed specifically around the trio's unique ability to work in synchronicity, with the express intention of making the most of their leadership skills.

The result was a warrior unlike any other, that struck fear in the core of Beta and Horde alike, capable of hiding in plain sight among the Soleron workers, but acting as a powerful force on the battle field. In the cycles that followed Melix, Balthazar, and Gasper both separately and as Warbot Trianix, fought in countless conflicts and led nigh-impossible seeming missions deep into enemy territory, always surviving no matter the wounds taken, inspiring the core to feats they could not have reached otherwise.

The Alpha Council came to rely on their judgement in all matters of the war, raising them to the leadership of the Warbot Core and eventually bestowing upon them the leadership rank of Alpha Pura.

The biography for Steel Core mentions that Steel was considered for Project Alpha due in large part to his dedication to the war effort, but his fierce independence ruled him out.

Turns from robot to three vehicles with Soleron drivers. Stands about 8 inches tall. The Solerons can each form the chest or shoulders of the large robot.
Shares his basic design with Trianix Delta. 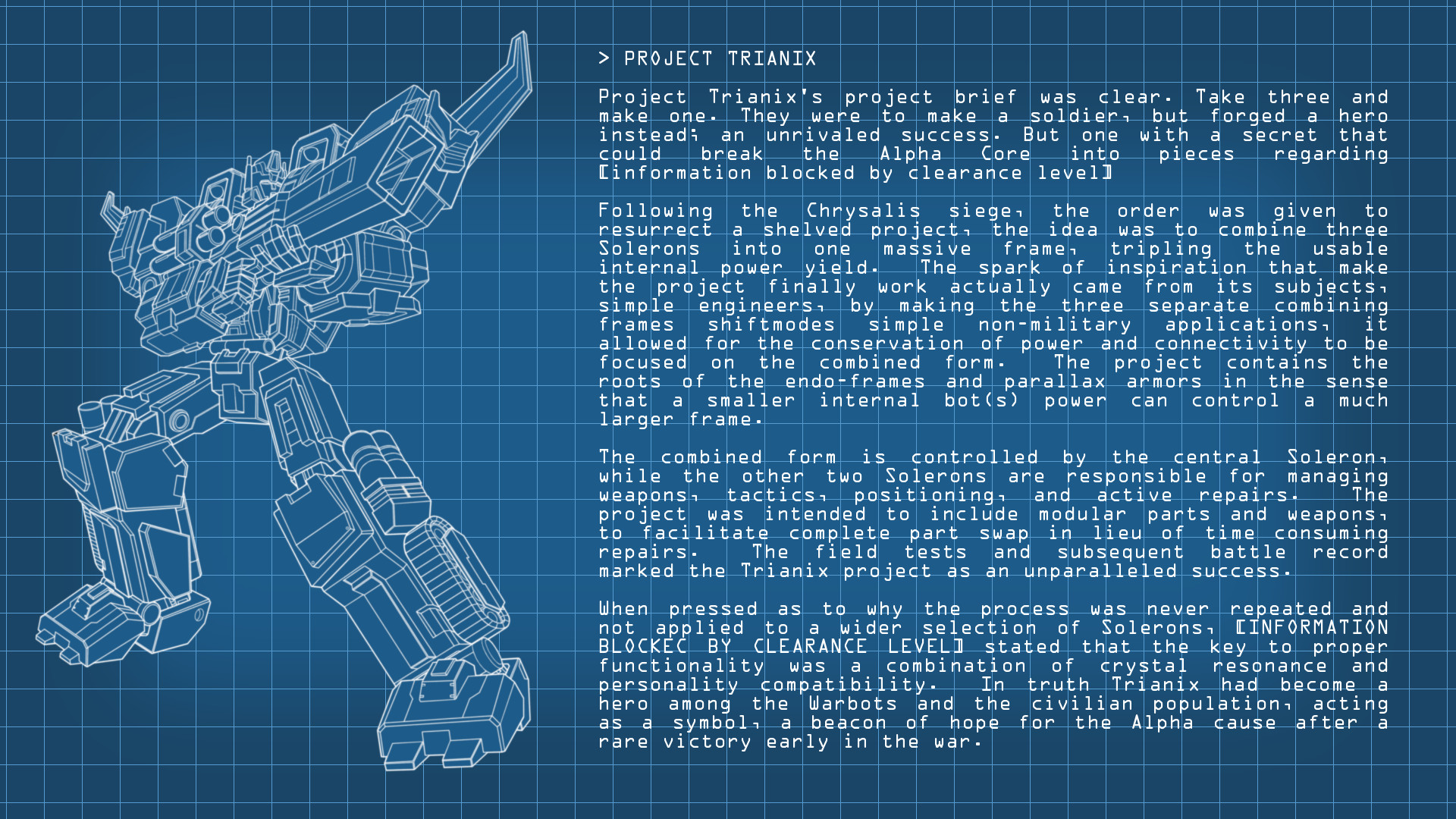