Difference between revisions of "Traitor (GoBots)"

For other uses, see Traitor.

Traitor is a fictional character from the GoBots series. He is a Renegade GoBot who turns into a robotic wasp and launcher.

Traitor should not be confused with the iGear character of the same name.

Traitor was named number 19 on the list of "20 GoBots That Remind Us Why the GoBots Sucked So Incredibly Hard" by Rob Bricken on gizmodo.com in 2013.[1]

Like most GoBots, Traitor has numerous abilities because of robotic body. He can survive in space and is super-humanly strong and tough. He can fly in robot mode and project energy blasts from his hands. His body heals quickly when supplied with energy. He can turn into a robotic wasp and launcher. 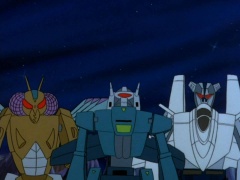 Traitor, Re-Volt and Chaos in Challenge of the GoBots

In the Challenge of the GoBots episode "Guardian Academy" Traitor was one of three Renegades sent to masquerade as Guardian cadets in order to kidnap Zeemon at their graduation ceremony. Only Tri-Trak suspected their true nature, but Traitor disabled the trainee and the three strung him up in the target range while they attended the graduation. They managed to capture Zeemon before Tri-Trak could warn the Guardians, but were stopped when he and his team-mates gave chase and disabled their Thruster. Traitor was then captured.

Traitor appeared in the Transformers: Renegade Rhetoric story "The Hawks of Space", where he discovered the development of the Space Hawk ships by the Guardians and UNECOM.[2]

Traitor was featured in the 2016 Ask Vector Prime story Echoes and Fragments, set during the events of The Transformers: The Movie. The manipulations of the evil Gong and Sideways resulted in various GoBots swapping places with characters during the events of that film.[3]