Thad William Allen (born January 16, 1949) is a retired United States Coast Guard admiral who served as the 23rd Commandant of the Coast Guard. Allen is best known for his widely praised[1][2][3] performance directing the federal response to Hurricanes Katrina and Rita in the Gulf Coast region from September 2005 to January 2006. Robert J. Papp, Jr. succeeded him as Commandant on May 25, 2010, in a change of command ceremony.

Allen officially retired from the U.S. Coast Guard on June 30, 2010, but for 36 days continued in his role as National Incident Commander of the Unified Command for the Deepwater Horizon oil spill in the Gulf of Mexico. He is a Senior Vice President at Booz Allen Hamilton.[4]

Allen was born in Tucson, Arizona, the son of retired Coast Guard Chief Damage Controlman Clyde and Mrs. Wilma Allen. His father is a World War II veteran. Allen is a 1967 graduate of Palo Verde High School in Tucson. His family moved frequently during his childhood with his father's assignments. He attended the United States Coast Guard Academy in New London, Connecticut, where he was a standout football player, graduating in 1971.[5] He holds a Master of Public Administration degree from George Washington University and a Master's degree in Management (S.M.) from the MIT Sloan School of Management as a Sloan Fellow.[6] He was elected a National Academy of Public Administration (United States) Fellow in 2003.[7] 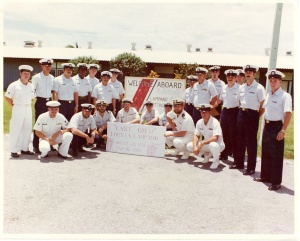 Admiral Thad Allen, then a Lieutenant, poses with his crew on 22 August 1975 (front row, second from the right). Allen was the last commanding officer of LORAN Station Lampang, Thailand. Station Lampang was part of the LORAN chain first put into use as part of “Operation Tight Reign” in support of military operations in Vietnam.

In his four decades of service, Allen has held operational command both at sea and ashore, conducting missions to support the maritime safety, security and environmental stewardship interests of the nation. He served aboard USCGC Androscoggin (WHEC-68), and USCGC Gallatin (WHEC-721) and commanded USCGC Citrus (WLB-300). He performed dual roles as Commanding Officer of Group Long Island Sound and Captain of the Port, and he commanded Group Atlantic City and LORAN Station Lampang, Thailand[6] from 1974 to 1975.[8] He also commanded the Seventh Coast Guard District in Miami and the Atlantic Area in Portsmouth, Va.[7]

Allen's first assignment as a flag officer was as Commander, Seventh Coast Guard District, where he directed all operations in the Southeastern United States and Caribbean. Following that assignment he served as Commander, Atlantic Area and U.S. Maritime Defense Zone Atlantic. In this capacity he oversaw all Coast Guard operations on the U.S. East Coast, Gulf Coast, and Great Lakes in the aftermath of the September 11 attacks. Allen served as the Coast Guard's Chief of Staff from May 2002 until May 2006. As Chief of Staff, Allen was third in the Coast Guard's command structure, and was commanding officer of Coast Guard Headquarters in Washington, D.C.[6]

On September 5, 2005, while serving as Coast Guard Chief of Staff, Allen was appointed deputy to Federal Emergency Management Agency Director Michael D. Brown by Homeland Security Secretary Michael Chertoff, and placed in charge of Hurricane Katrina search-and-rescue and recovery efforts. Former colleagues interviewed after the announcement praised Allen as well-suited to the task.[2]

On September 9, 2005, Allen was given full command of the Bush administration's Hurricane Katrina onsite relief efforts. Secretary of Homeland Security Michael Chertoff elevated Allen following the removal of Federal Emergency Management Agency Director Michael D. Brown from that position. Allen announced on January 25 that he would be relieved of this responsibility on January 27, 2006.[9]

Allen assumed the duties of the 23rd Commandant of the Coast Guard on May 25, 2006.[7] He was appointed to a four-year term by President George W. Bush and confirmed by the Senate.[10] Admiral Robert J. Papp, Jr. succeeded him as Commandant on May 25, 2010, in a change of command ceremony.[11]

On April 30, 2010, Homeland Security Secretary Janet Napolitano announced that Allen would serve as the National Incident Commander for the federal government's response to the Deepwater Horizon oil spill in the Gulf of Mexico.[12] Even after his end of service as Commandant on May 25, 2010, Allen continued to serve as National Incident Commander, first as an Admiral on active duty, and then later as a DHS official.[13]

On June 30, 2010, Admiral Thad Allen officially retired from the U.S. Coast Guard. His official portrait, painted by artist Michele Rushworth was unveiled at that time at Fort Lesley J. McNair.

He continued to serve as the Deepwater Horizon National Incident Commander until October 1, when that position was disestablished.[14] Later that month, Allen joined the RAND Corporation as a senior fellow.[15] On November 28, 2011, Booz Allen Hamilton named Thad Allen a Senior Vice President at Booz Allen Hamilton. Allen joined the firm’s Justice and Homeland Security business and will lead development of thought leadership and client engagement regarding the direction of law enforcement and Homeland Security.[16]

Allen resides in Chevy Chase, Maryland, with his wife Pamela A. Hess, whom he married in October 1975. They have three children and two grandchildren.[7]