Difference between revisions of "Starriors" 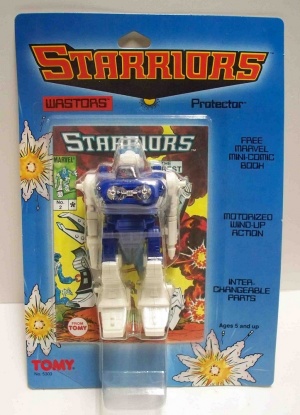 Starriors was a toy line and comic series distributed by Tomy and Marvel Comics in 1984.

Starriors was a toy line created by Tomy in 1984, released primarely in the United states, but with additional products released in Mexico and Japan.

Set on a future Earth, Starriors involves a trio of robotic groups created by future human scientists: the Protectors, Guardians, and Destructors, each created with a different role in insuring that a solar flare ravaged Earth would once again become habitable by humans. However, the Destructors and their leader, Slaughter Steelgrave, became fearful of deactivation upon the restoration of humanity, and thus sought to claim the planet for his own kind. They apparently succeeded in defeating all of the Guardians, and for a time Steelgrave's Destructors ruled the planet unopposed. However, a group of the enslaved Protectors eventually rediscovered their dedication to humanity, and with a few loyal Destructors and the last of the Guardians sought to reclaim Earth from Steelgrave.

There is much speculation about the existence of Starriors animated material. A 1984 trade advertisement released by Tomy stated "There is currently a Starriors television mini-series in production to air in Spring and Fall '85."[1]

Each Starrior has a Class, and a Series, while several of them have a model. 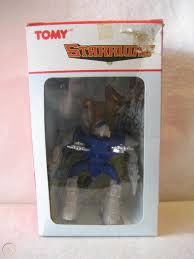 Starriors toys released in Mexico were a mix of six renamed Wastors in new packaging, a Mexican release of Twinhorn and the Armored Battle Station. There was no Mexican fiction. 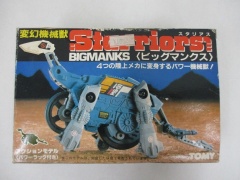 Tomy released six Starriors brand toys in Japan. These included recolors of Deadeye and Cricket (called Warugasu), Runabout (called Bigmanks) and Speedtrap. Each toy was released in two color variants, each unique to Japan except the red variant of Warugasu, which was identical to Deadeye.

Influence on other toys

This article is a stub. You can help WikiAlpha by expanding it.
Retrieved from "http://en.wikialpha.org/mediawiki/index.php?title=Starriors&oldid=208531"
Categories: