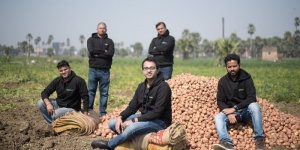 Shashank Kumar is an Indian entrepreneur who co-founded Green Agrevolution also known as Dehaat, a start-up working in the agriculture sector in India.

He was born in Chapra - a small town in Bihar, India and raised in a lower middle class family. Her father is a retired 3rd year government official at the Bihar National Electricity Board and her mother was a teacher in a public school. After completing his basic education from Netarhat Residential School, Jharkhand, he went to IIT Delhi for his undergraduate studies in Textile Engineering and graduated in 2008. He also obtained his minor MBA degree from the department. of Management and Studies from IIT Delhi in 2008.[1]

After graduating from IIT Delhi in 2008, he joined a management consulting firm Beacon Advisory Services where he worked as a partner for two and a half years. His area of work was the supply chain, retail and FMCG industries. He has worked for leading FMCG companies for their secondary distribution network issues; Price elasticity and continuous replenishment system.

He along with his old friend Manish Kumar from IIT Kharagpur started a non-profit Farms and Farmers Foundation (FnF) Foundation in 2011 with the aim of maximizing profit per unit area of ​​small and marginal farmers in India. . He started his work from his home state - Bihar, India. Under his leadership, the FnF was able to put together an excellent team of people from IIT Kharagpur, IIM Ahmedabad, NIT Jamshedpur, ISM Dhanbad & FnF won many awards such as Mahindra Spark The Rise, Jain-INCID for their work on micro-irrigation in Bihar, India. FnF obtained initial support from NABARD under the Rural Innovation Fund (RIF) and UPNRPM. In the space of 5 years, the FnF created its national and global entity to conceptualize and implement the concept of rural entrepreneurship in agriculture and to offer end-to-end agricultural services to small farmers. The FnF also encourages farmers to create a community-owned institution as an organization of agricultural producers (FPO). His work at the FnF has been featured by many major media groups - Times of India, [1] ET, HT, CNN-IBN and many more. In 2014, the FnF was awarded by DFID as part of the FICCI Millennium Alliance initiative and was funded to work in other developing countries in South Asia. Nepal. He resigned from his post of President of the FnF during the 2015-2016 financial year when the leadership role of the FnF was transferred to Shyam Sundar Singh (IIT Kharagpur and IIM Ahmedabad) and Sonu Kumar Adarsh ​​(ISM Dhanbad) .[2]

While working as President of the Farms & Farmers Foundation (FnF), he felt the need for technology to build a scalable working model to improve efficiency and transparency in the agricultural sector. value chain. In 2012, he co-founded a social enterprise, Green Agrevolution, and developed a technological model of last mile agricultural service delivery - DeHaat. DeHaat is a mobile technology that connects small farmers to their 360 degree agricultural requirement - seed to market. The Android version of DeHaat is used by local micro-entrepreneurs, farmer groups and agricultural producer organizations (FPO) to deliver various services to local farmers in a sustainable way. Each DeHaat unit accommodates 1,000 farmers in a catchment area of ​​6 to 7 km. It brings together services such as a wide range of agricultural inputs (seeds, fertilizers, crop protection), personalized advice on crops and links with the agricultural products market under one roof. Smallholder farmers have access to DeHaat's services at a cost of INR 200 per farmer per year.[3]

Along with another co-founder, Amrendra Singh (Computer Engineer, NIT Jamshedpur), he led his team to many milestones such as victory. Vodafone Foundation “Mobile for Good” in 2015, [2] Eureka at IIT Bombay in 2013, Tata Social Enterprise Competition at IIM Calcutta in 2014, Action for India in 2015. DeHaat was presented by Business outlook among the 20 best innovations in the field of social business in 2014. [3] While working with more than 10,000 Bihar farmers, TOP. & Odisha, DeHaat was also presented by Yourstory in 2015. He was invited in many institutes like IIT Kharagpur, IIT Kanpur, XLRI, IIM Lucknow, IIT Patna [4] to talk about entrepreneurship and motivate young people to enter the agricultural sector.

He is married to Mailinie, a former IIT Delhi alumnus who is AVP with a consultancy firm, Service EXL. They have a daughter.

He was awarded by the Ashoka Fellowship in 2013 as a global actor of change. [5] Honorable CM, Bihar Shri Nitish Kumar awarded him the title of Social Entrepreneur of the Year, Bihar in 2012-13. NABARD, ISB & PARFI awarded him as a leading social entrepreneur in 2013. In 2014 he was featured by Forbes India magazine as Forbes 30 Under 30. [6] He was also featured as Amazing Indian by Times Now in 2014. He was also awarded the Lifetime Achievement Award at IIT in 2008.

He presented DeHaat technology to PM, Rwanda in Delhi in 2015 at the Indo-Africa Technology Summit. He accompanied PM India & FICCI delegation to Kenya in 2016 to present DeHaat technology. He was invited to Tanzania by Bill and Melinda Gates Foundation to participate in the development of an effective agricultural extension model in 2015. He was also invited to TiECon silicon valley in 2016 as a TiECon speaker