Difference between revisions of "Seawing"

Seawing is the name of two fictional characters from the Transformers series. The first is a Seacon Targetmaster who turns into a manta ray monster who was introduced in 1988 as part of Generation 1. Seawing was also one of the drones used by the villains in the anime series Transformers: Super-God Masterforce, where he is called Kraken. The second Seawing is his heroic mirror-universe counterpart from the Shattered Glass story.

Seawing is a Scramble City style combiner, able to form a limb of any Scramble City gestalt robot or combining with Metroplex or Metrotitan, but most commonly forming a limb of Piranacon. He forms the left arm of Piranacon on the toy instructions. Like all the Targetmaster Seacon limbs he can also form a weapon.

The Japanese tech specs say Kraken can obtain an underwater speed of 200 knots, the fastest of the Seacons.

Generation 1: Glides through the seas like a sinister steel spector. Enjoys surprising and then destroying his targets. Nothing escapes his notice... or his grasp. Equipped with electrical, chemical, and infrared sensors, long range sonar. Converts to dual proton blaster in weapons mode. Underwater, can detect and home in on anything living or moving within a 20 mile radius. Maximum speed: 110mph. Armed with double venom lasers that paralyze on contact. Combines with fellow Seacons to form Piranacon.

Timelines: Seawing still takes pleasure in the little things: moving through the darkest seas, finding unsuspecting targets and destroying them right at the moment when they realize they are doomed. Though now seems content with his position in the Decepticon hierarchy, he actually waits patiently for Overbite to make a mistake so that he can take his rightful place as sub-commander of the group. That time will come, but for now he just watches, collecting tidbits of information on his teammates and all the while looking for his next unsuspecting target. A dual-photo cannon Targetmaster mode now disrupts metallic substances on a subatomic level. Even if a machine is lucky enough to survive a blast, they will glow brightly for hours after the attack, making them an easy target the next time around.

Transformers: Like an underwater ghost, Decepticon Seawing glides through the aquatic gloom, emanating danger. He likes the murky depths where he achieves a quaking respect with his mere presence. His Decepticon comrades suspect his ambition reaches beyond the Seacons to a larger role and Decepticon Seawing neither confirms nor denies this rumor because he does secretly regard himself as destined to command.

Seawing was the model for some of the Decepticon Kraken drones seen in the Transformers: Super-God Masterforce anime series. Kraken drones were first seen in episode #3.

King Poseidon appeared in the pilot episode of Transformers: Zone as one of the nine Decepticon Generals. He attacked the Earth looking for the Zodiac and was destroyed by Dai Atlas.

In a story called "Memories of Bumblebee" from Transformers Comic-Magazin issue #15 by German comic publisher Condor Verlag Bumlbebee views a recording of Optimus Prime where he identifies Autobots and Decepticons in battle using the Ark's computer. The Seacons are among those he displays.[1]

The Seacons would return in the third Devil's Due crossover between G.I. Joe and the Transformers. Without Megatron or Shockwave's steadying influence the Decepticons had fallen apart in a series of internecine conflicts. One such was the Seacons taking on the Predacons. The Predacons seemingly had the upper hand, forcing Nautilator to flee into the water. The Seacons emerged as Piranacon and battled Predaking, until interrupted by a strange, tiny figure: Serpentor, a human military cyborg built with Megatron's memories. Using these memories to convince both combiners to join him, they then participate (along with the Stunticons) in the ambush that kills Bumblebee. They were then Serpentor's principal weapon, along with Predaking and Menasor, in the attack on Capital City, where the three of them defeated Omega Supreme. Several Predacons would die in the attack. Unfortunately Piranacon wouldn't have time to enjoy his victory, as he was deactivated by an out-of-control Sixshot smashing into his face. The Seacons would survive, but Nautilator was killed when the G.I. Joe ninja Snake Eyes uses his mental powers to convince the Stunticon Breakdown to shoot him.

Each of the Seacons had a biography printed in issue #5 of the Dreamwave Productions Transformers: More Than Meets The Eye series.

Seawing appeared several of the Classicverse stories by Fun Publications.

The Seacons appear in At Fight's End. Under Megatron's orders the Seacons pretend to be loyal to Bludgeon the and frame the Terrorcons for betraying Bludgeon. Once Bludgeon is distracted the Seacons form Piranacon and attack Bludgeon himself, finishing off Bludgeon with Tentakil's mass-compression cannon weapon mode.[2] 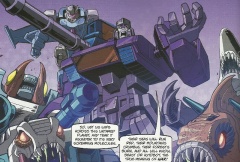 Seawing appears in Beast Wars Shattered Glass. In this story Ultra Magnus and the Autobots aboard the Graviton battle Megatron and the Decepticons aboard the Talon. Both ships are pulled through a vortex into the past of Shattered Glass Earth. Crashing they discover that dangerous energon readings outside the ship will place them in stasis lock. The Autobots devise organic alternate modes to protect them from the energon. The Decepticons create energon-absorbing armor for protection. Seawings' armor give him new colors (based on the Beast Wars II Terrormander toy).[3] Ultra Magnus and his Autobots discover that their ship's high security storage rooms were damaged in the crash and the Autobot bodies in stasis pods were lost. They head out to recover the pods when they are attacked by Dirge and Seawing. They find the pods, but also discover that Megatron has gotten to them first. He's converted the three Autobots into Autojetter, Autolauncher and Scylla, who are loyal to him. The Decepticons attack the Autobots, who are only saved thanks to the intervention of Depth Charge. Ultra Magnus orders the retreat, as there is nothing left for them to recover. Depth Charge informs the Autobots of his mission to save the multiverse.[4] The Decepticons pursued the Autobots to a chasm, where they watched Megatron take on Ultra Magnus and be defeated. They climbed to the bottom of the chasm to retrieve their fallen leader and found a giant face hewn into the rock. It cheered Megatron up immensely once they dug him out of the rubble. Seawing and the others watched Megatron utilize the equipment in the cavern they'd found. The Seacons later attempted to retrieve the "Maximal" energy purifier, and merged into God Neptune so they could fight off Magnaboss. Seawing spied on the Maximals, enabling Megatron to intercept them just as they found the Origin Matrix. Combining into God Neptune once more, the Seacons battled the Maximals until they were all sucked into a dimensional rift thanks to Ultra Mammoth.

Seawing appears in a cheering crowd in Megatron Origin issue #2.

After the war concluded, Seawing was part of the Decepticon force that conquered Temptoria. They didn't have long to wait before the Lost Light crew arrived and roughed them up, liberating the planet.

Imprisoned on board the Lost Light and returned to Cybertron, the group was released by Ravage to interrupt Megatron's trial. While the guards were distracted, Seawing rushed to his leader's side with a teleport pack, but Megatron had accepted his fate and refused to take the opportunity to escape, leaving a confused Seawing to be taken down by the Autobots

With the US Transformers animated series having come to a close the previous year, it fell to the comic book series from Marvel Comics to provided supporting fiction roles for the Seacons. However, their comic book debut came not in the pages of the US title, but in its sister across the Atlantic, the UK's official Transformers comic, which interspliced its own stories with the US material.

The Seacons were brought to Earth by Shockwave to put their undersea adeptness to use fortifying the Decepticons’ sub-aquatic island headquarters. Outfitted with Earth modes by Shockwave, the Seacons were going about their task when they met with their first challenge, which also proved to be one of their greatest – they were ordered to defend the island against the insane, time-traveling future Decepticon, Galvatron. The Seacons gave a good account of themselves, merging into Piranacon (misspelled "Pirranacon" in the story) for extra power, but ultimately, the team was defeated by their stronger adversary, only for Galvatron to reveal that he had not planned an attack at all, merely wishing to talk. Now, however, he claimed that Shockwave had made an enemy of him – although it was all part of a plan to destabilize his leadership. Seeking a weapon that could truly combat Galvatron, Shockwave sought out the former Decepticon leader, Megatron, who had been missing in action for some time. When what was believed to be his body (but was, in actuality, a clone of him) was located in the Thames river by entrepreneur Richard Branson, Overbite (called Jawbreaker in his UK appearances) was dispatched with some of the Decepticon jets to bring the body to Shockwave. Snaptrap subsequently repaired the clone’s physical damage, and aided Shockwave in using the psycho-probe to brainwash it into his service.

Following this, the Seacons made their US title debut, having departed from Shockwave's service and now under the command of Ratbat, the leader of the primary Earth-based Decepticon force. Ratbat had relocated the Decepticons' island base to the Florida Keys, disguising it as a holiday resort named "Club Con" to allow the Seacons to search the seabed for a sunken pirate ship, the treasure chest of which contained two Autobot tapes, Grandslam and Raindance. The recovery mission was successful, but the tapes were then stolen by the Autobot Blaster, and the holiday makers on the island had their peace and quiet rudely interrupted as the Seacons erupted from the ocean and attacked, searching for Blaster. In the ensuing battle, Blaster sent the tapes back to the depths of the oceans, encouraging the Seacons to call off the attack and head after them.[5]

The tapes, it was revealed, were sent to Earth centuries ago to warn the Autobots there of the approaching threat posed by the Underbase, a massive space-born information storehouse that could convey infinite power. However, first Ratbat's forces had to deal with a rival group of Decepticons under Scorponok, who had been called to Earth by Starscream, and the Seacons' combined mode of Piranacon was put to use in an attempt to destroy his ship. Conflict soon broke out between the two groups. Unfortunately the whole thing had been a ruse by Starscream, who managed to attain the Underbase's power, turning on Autobot and Decepticon alike and attempting to conquer Earth. The Seacons joined in the attempted defense of New York, striking at Starscream from the East River, but were all deactivated by the cosmically-powered villain.

Seawing appeared in the Transformers: Mosaic story "Butcher of the Bogs" by Optimutt.[6] 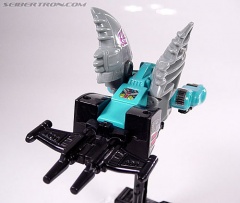 Seawing was sold in 1988 by itself, and later with the other Seacons as a gift set. This mold was also used to make Beast Wars Second Terrormander. 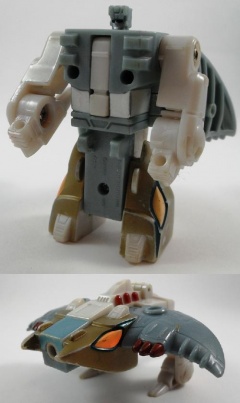 Sold in a gift set with the other Seacon Space Pirates. Terrormander is a recolor of the Generation 1 Decepticon Seawing, but missing all the accessories. He was packaged together with his 4 fellow Seacon Space Pirates.
The toy for Terrormander is 8 centimeters tall and the character is supposed to stand 2.5 meters tall, meaning the toy is about 1:31 scale.
This toy was repurposed as Seawing. This toy was later recolored into Timelines Seawing.

Seawing was sold in 2008 with the other Seacons as a gift set. A Transformers Collectors Club exclusive.

A commemorative giftbox of the Seacons.

A set of replacement labels for the Generation 1 Seacons.[7]

A set of labels to enhance the Generation 1 Seacons.[8]

A set of replacement labels for the Timelines Seacons.[9]

The second Seawing is the heroic mirror-universe counterpart to the original Seawing. Little is known about him besides him being a member of the Mayhem Suppression Squad.

A set of Decepticon symbol labels in red. A Captured Prey exclusive.[10]