Rom Stol is a fictional character from the Machine Robo series. He is a heroic members of the Cronos Clan introduced in 1986.

Rom Stol is a heroic member of the Cronos Clan, but he was not born on the planet Cronos. He came to the planet as a child with his family in a ship piloted by his father. He is the middle child in his family, with his older brother Gardi and younger sister Reina Stol. He was trained by his father Master Kirai Stol in Tenku Chushin Ken martial arts along side his friends and constant companions Blue Jet and Rod Drill. He stands 6 feet 1 inches tall and weighs 1940 pounds. He has telescopic vision. Due to intense physical training Rom has near very powerful legs, and is capable of impressive kicks and leaps. He can focus his attention and speed so precisely as to be able to catch a single drop of water in a waterfall. Because of his mechanoid nature Rom Stol does not need to breath oxygen and is resistant to cold, but is vulnerable to intense magnetic fields.

Rom Stol's a main weapon is the Wolf Sword, given to him by his father, which can summon the Blade Dragon (Kenryu in Japan) and Vikung-Fu (Baikanfu in Japan) armors. The Blade Dragon armor can fly, while the Vikung-Fu armor has nearly limitless strength. He also uses a Blazer Cannon and a Power Riser suit. Rom frequently drives a sentient, but non-transforming car, named Battleflex. 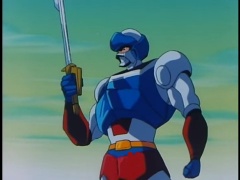 Rom Stol receives the Wolf Sword from his father in Machine Robo: Revenge of Cronos episode 1, "Rising Storm! The Fighting Style of Justice!"

Rom Stol was one of the main characters in the animated series Machine Robo: Revenge of Cronos. He first appeared in episode 1, "Rising Storm! The Fighting Style of Justice!". His father was killed by the Gandora in their search for the Hyribead. He lead his friends and fellow martial arts students Rod Drill and Blue Jet in rescuing Reina Stol and Triple Jim from Devil Satan 6.[1]

In episode 2, "Wolf Sword! Call Forth the Thunder of Courage!" Rom and friends attended the funeral of his father, where Rom called Battleflex and took on a quest to follow the Wolf Sword's directions to oppose the Gandora threat to Cronos. This quest would lead the companions to Sado fortress, with the Wolf Crest which attacked by Grujios and the Devil Satan 6. Rom and friends were captured by the Gandora when the people of the fortress betrayed them, but once it was clear the Gandora were still a threat, the people of the fortress helped free the companions. Rom used Vikung-Fu to defeat Devil Satan 6 once again.

In episode 3 "Steal the Metal Laster!", Rom Stol and his friends were traveling when Rod Drill fell into an acid swamp, which caused him to rust. The group traveled to the nearby village of Vira in an attempt to get water to clean Rod. The village was attacked by the Devil Satan 6, who were looking for the Metal Laster for Gades, which was rumored to cure rust and aging. Rom battled the 6, but they got away with a jug which they thought contained the Metal Laster. Luckily the jug contained acid from the swamp. Rod was cured of his rust by the real Metal Laster, and they made a friends with the people of the village, particularly Min, the daughter of the village chief. [2]

Rom Stol appeared in episode 4, "Devil Trap - The Enslaved Village" where he met Min of Vera village and fought Devil Satan 6 for the Metal Laster.[3]

Rom Stol appeared in episode 6, "The Rock People and Mizuchi the Mysterious Dragon".[5]

Rom Stol appeared in episode 8, "The Demon Sea of the Lost Civilization of Mu".[7] 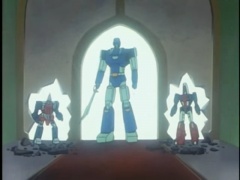 In episode 10, "Defeat Bug, the User of Darkness!", Rom confronted a group of bandits lead by his fellow martial arts student Bug Newman who were attacking Iron City. Bug and Iron Sand were defeated by Rom and Vikung-Fu.[9]

In episode 19, "Race to the Death!" Rom Stol and Battleflex narrowly lost the race at Momo to Rod Drill.[10]

In episode 27, "The Magic Mountain Knight Maskrock" Devilrock, Doublerock and Geigerrock spied on the team lead by Rom on their way back to Yamalin City.

In episode 28, "Tough Trailer - 10 Seconds to Detonation" Rom was present in Yamalin City during a Gandora that lead to the city's core computer starting a self-destruct countdown. The Countdown was stopped at the last moment by Rod Drill.[11]

In episode 31, "The Curse of the Demon Sword Medusa", Battle Robo, Missile Tank Robo and Skyline Robo attempted to talk Rom Stol into taking the fight to the Gandora instead of waiting for them to attack again.

In episode 35, "The Secret of the Jewel People", Rubyman was trapped in Devil's Cave and sent Magnarock for help. Devilrock and Doublerock pursued Magnarock until Rom and Pro Truck Racer intervened. Magnarock returned with Reina, Pro Truck Racer, Rod Drill, Rom and Triple Jim, who freed him. Outside the cave they were confronted by Gandora forces lead by Diondora. She promised not to harm the other if Rubyman went with her. Although Rubyman agreed to go for the sake of the others, Blue Jet arrived with reinforcements and helped them overcome the Gandora.[14]

In episode 38, "Raise Your Gun Helitranser", Rom lead a team which attempted to ambush Devil Satan 6 members Gillhead and Barabat in the city streets, but it ended up being a trap set by Ashura.

In episode 41, "Power Riser - Break Through the Enemy" when Rom attempted to leave in his Power Riser suit to take on the Gandora he was joined by many of his allies, including Bike Robo, Blue Jet, Kenpo Robo, Reina, Rod Drill and Triple Jim.

A Rom Stol action figure with a cannon that shoots plastic pellets.

A new 1/22 scale mold by Yamato. Comes with a sword and shield. Stands 6 inches tall.

Comes with Rom and Reina Stol as well as the Blade Dragon and Vikung-Fu armors.