Robo Force was a toy line created by the Ideal Toy Company in the year 1984.[1] The line was revived in 2013 by new rights holder Toyfinity.[2] 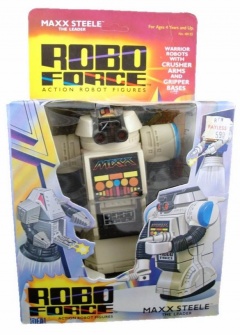 The original toy line featured robot action figures with suction cup bases and "crusher arm" action. In addition each figure, which basically resembled a customized Dalek, also included another gimmick or two such as a hook or extendable guns. Besides action figures, there was also an Electronic Maxx Steele Programmable Robot and a Maxx Steele Erector Set released.

While the figures were developed up to the product catalog photo stage, they were not released before the original line came to an end. A few early production Tiltor sample figures have pop up over the years and gotten into the hands of collectors.[3]

The current rights to Robo Force - along with former Ideal lines Rocks & Bugs & Things, Zeroids, and Manglor - are held by production company Toyfinity. Compatible with the Glyos System Series designed by Onell Design, the Robo Force kits feature 41 or more pieces a figure which can be arranged and re-arranged in any way the user sees fit.[5] The new line was launched at New York Comic Con with a limited run Maxx Zero: Genesis Edition figure.[6] Some figures receive more than one edition to go along with the developing story line featured in the new Robo Force comic book.[7] By 2018 two additional Robo Force kits had been introduced offering additional parts to create Zeroids and more members of the original Robo Force line-up.[8]

In original Toyfinity Robo Force mold was released in 2013 as Maxx Zero Genesis Edition. It contained 41 parts inspired by Enemy, Hun-Dred, Maxx Zero and Sentinel. It could be assembled in a variety of configurations which included articulated legs and tank treds. Paint and additional parts were used to create numerous other characters.

A completely new Robo Force mold was released in 2018 as Zetonian Proto Enforcer. Made up of 26 parts inspired by Coptor and S.O.T.A. among others. This design featured a round body and a suction-cup-like base.

Zetonians
Modern Zeroids-based mechanical beings from the lost outpost of Andor. New body features a circular design to mimic the suction cup look of the original line. A joint design between Toyfinity and Onell Design.

In 1984, Ruby-Spears Productions released an animated adaptation of the series in the form of a one-shot special called "Robo Force: The Revenge of Nazgar."[12] Michael Hack provided Voice Direction with Flint Dille writing and Ron Jones composing the music.

A scientist named Dr. Fury and his family are in his house with Coptor. Suddenly, the evil robots led by Hun-Dred blast their way into his house. Coptor fires on the evil robots, but is defeated. The scientist is abducted by the evil robots for his research on putting human brains into robots. Hun-Dred and his crew would like Dr. Fury to do this for the evil Nazgar, who created trouble for the scientist's planet nearly two-thousand years ago.

Ten years later, a repaired Coptor and Dr. Fury's son (Mark Fury) along with new robots like Maxx Steele created by Mark go on a mission to find his father.

The final battle occurs in Nazgar's headquarters. Nazgar (whose brain is now in a robot body) seemingly escapes, Hun-Dred and a laser gun meant to wreak havoc on the planet are destroyed by Maxx Steele and Dr. Fury is saved.

The animated Robo Force adaptation was released by Warner Archive as a special feature for the volume 2 DVD release of Challenge of the GoBots on March 10, 2015. This is its first home video release.