Thomas Luke, also known as Rev. Thomas Luke is a member of the Crisis Response Team ordained as a Christian chaplain by Chaplains International, Inc. He is the Host and TV producer of The Rev Luke Show which is broadcast during prime-time Fridays at 8:00pm EST and is also available on video on demand (VOD) on The NOW Television Network, Christian TV, United States. The NOW Television Network broadcasts the Gospel of Jesus Christ to over 236 Million Homes in the US, Sub-Saharan Africa, and Western Europe on Satellite. 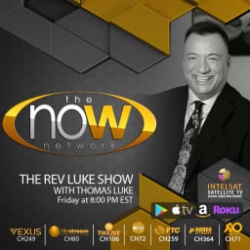 A Christian television talk show host is someone who is responsible to bring glory to God during the show. The Christian host should acknowledge in their heart that Jesus Christ is the only star of the show. Neither the host nor the shows guests shall be glorified, however, the guests may be recognized publicly for their efforts. The host agrees to act only as a sub-host next to Jesus Christ the only star of the show. The host typically interviews people of interest as well as Christian celebrities that bring glory to Jesus Christ and not themselves. The host may also bring in experts who are gifted by the Holy Spirit in order to educate the viewers on different topics. Therefore, the television host may act as a God glorifier, encourager, comforter, interviewer, educator, mediator, or all six.

A Christian television producer is responsible to make sure the guests being interviewed have godliness that either surpasses or equals their gifting, while never choosing to gift over godliness. It is also the responsibility of the producer to only have guests on the show that are submitted to spiritual authority (Hebrews 13:17, Ephesian 5:22-23) A producer coordinates and supervises all aspects of a production, from the creative to the administrative. TV producers also make the financial decisions and handle contracts, talent and bargaining agreements, and other administrative details. While producers get to be in on the fun of planning and executing a production, they also deal with troubles during production and keep everything within budget.