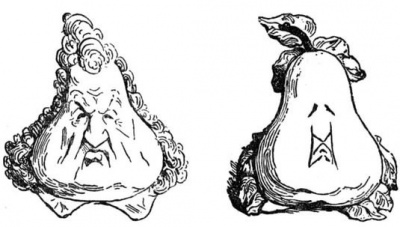 Pearitis is a recently dicovered desease of which there has been an outbreak at school. It is still in debate whether this illness is real and no one has worked out how it is caught, transmitted, or cured. It is a disease of the mind, and can have many different effects. The reason people dot know if anyone actually suffers from this desease is that 97% of claimed victims where also diagnosed with hyperchondria. What scientists at the moment are trying to work out is how this disease started, and why people who suffer with a combination of hyperchondria and obesity are by far more likely to catch it.

What does the disease do to you?

Pearitis makes the victim think he or she is a giant pear, and also it slows down activity in the brain, making the victims less intelligent. The victims can feel depressed and may have cravings for fatty foods as a result. Either the disease or the depression it causes makes the victim aggressive. However, if aggression is returned, the victim can get easily upset by this.

There had been quite a few recorded victims of pearitis, but their names cannot be revealed on the Internet due to Internet safety regulations. The worst case discovered affecting a recorded victim, who I will not name, includes severe symptoms: thinking he is a big fat pear, mild depression, paranoia brought on by random events, and turning up at a person's house and asking for chips for no apparent reason. However, the last one could be a result of pearitis making his brain less intelligent and making him want more fatty food.

Theories about how it spreads and is caught

One theory is that it's passed on to you from your mother or father at birth an that it developes and you start to show full symptoms around puberty age , Another theory is that it is passed on like the common cold, and that it comes and goes quickly. The last theory is that it is not actually a mental condition and people with hypochondria , mental problems and food problems use it as an excuse to eat more food, be stupid, and to act ill.

If anyone reads this and has any theories about how it is fought passed along or cured edit this part of the article and add your theory!