Lobstros is a fictional character from the Micronauts series introduced in 1980.

Lobstros is a fictional character or vehicle in the Micronauts series.

The Lobstros toy was to be repackaged for the Mego Pocket Heroes line as The Claw, a vehicle for the Green Goblin. It was to include the figures of the Green Goblin and Spider-Man.[1]

In 2019 several parts for Lobstros were release on Shapeways by Mathew Robert Ignash.

"The Awesome Creature From The Distant Planet Of Hydra" 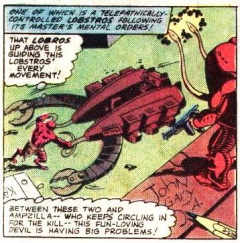 Lobstros appeared in issue 36 of the Marvel Comics Micronauts series. He was portrayed as a telepathically guided roboid from Homeworld which was guided by the Lobros member of the Death Squad. Lobstros fought Devil, but was defeated when Commander Rann and Marionette dropped a stack of Earth books on it.

A 1:18 scale toy.
Although advertised, this toy was very rare in the US, with most of the stock being diverted for sale by Gig. Units were also sold in English speaking areas of Canada by Grand Toys, but were in Mego packaging.

A release of Lobstros in Italy by Gig.