Difference between revisions of "King Poseidon"

King Poseidon is the combined form of several of the Seacons. He is formed when Turtler combines with any four Seacons, and often uses a fifth Seacon in gun mode as his Targetmaster. 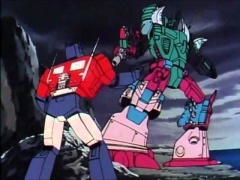