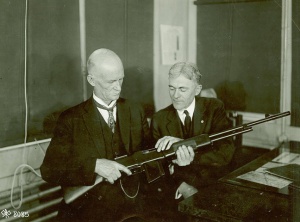 John Moses Browning (1855-1926) was an American gunsmith and inventor.[1][2] He invented many weapons that influenced the design of other weapons, or that remain in use today.

Browning was the principal designer for Winchester Repeating Arms Company from 1883 to 1902.[2]

Browning designed the M1911 pistol, a earlier automatic pistol design that has influenced the design of many automated pistols that followed it.[3]

John Browning's name is the inspiration for the Transformers character Browning and the Mastershooter Collectables toy Brown-King. Both of these fictional characters are robots who turn into guns.