Difference between revisions of "Hot Fight at Absolute Zero!"

Hot Fight at Absolute Zero! is the fifth episode of the animated television series Machine Robo: Revenge of Cronos, which was broadcast on August 7th, 1986 in Japan.[1] 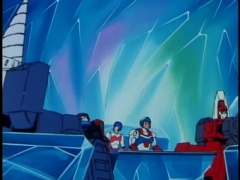 Rom and his friends follow the Wolf Sword's directions to Cronos' arctic area, where they discover some mysterious tracks. Unknown to them they are being tracked by Gades from the Gandora mother ship. Diondora and some troops are the source of the tracks - they are searching for the Hyribead. Gades tells them of the approaching travelers. Drill meanwhile creates an ice cave for his friends to rest in but they are trapped inside by Diondora and Zagam, a Gandora soldier who has easily adapted to the cold. Rom realizes they are under attack and sets off with Jet to draw the enemy's attention while Drill gets Jim and Reina to safety. However, Zagam tracks Drill. Although winning the fight against Drill, he is shocked by Reina's appearance and takes her with him under the ice. 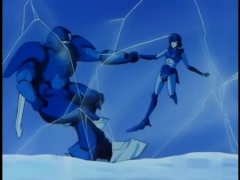 Zagam and Elura together in death in Machine Robo: Revenge of Cronos episode 5, "Hot Fight at Absolute Zero!"

Diondora is unable to defeat Rom and Jet and withdraws, swearing vengeance against Zagam for disappearing in the battle. Under the ground Reina awakes in a frozen graveyard. Zagam has second thoughts about leaving Reina to die as she resembles his long-dead lover Elura, who was killed in an avalanche. He returns her to Rom without being seen before reporting back to Diondora, who sends him to attack again. This time he goes through the ice with Rom, who summons Blade Dragon to fight him. Zagam is mortally injured and chooses to die under the ice with Elura. Rom reunites with the others and Reina notices a Wolf Crest shining on one of the mountains. It disappears, leaving the Hyribead a mystery still.