Difference between revisions of "Haywire (Transformers)"

For other uses, see Haywire.

Haywire is a fictional character in the Transformers series. He is an Autobot allied Nebulan Targetmaster, and partner to the Autobot Blurr. He should bot be confused with Hyperfire, Blurr's Titan Master partner.

Haywire is an excitable youth from Nebulan and makes an excellent match for the always-on-the-move Blurr. With his energy and enthusiasm, he's one of the few Nebulans who can keep Blurr's pace! Haywire enjoyed his popularity among his friends but always felt a deeper calling to escape the clicks and social groupings of his peers and "make the Universe a better place." This idealistic liberal was reluctant, but is ultimately glad he made the decision to leave his homeworld behind and fight the evil Decepticons. As an electro laser cannon he reverses the polarity of an enemy robot's microcircuits and leaves them motionless.

Haywire first appeared in the Transformers episode "The Rebirth, Part 1" as a sharpshooter among the rebel Nebulan group lead by Gort. In part 2 the Autobots copy Targetmaster technology from the Decepticons and Haywire is converted into the gun used by Blurr. In part 3 the Autobots and their Nebulans travel to Cybertron for the final showdown with the Decepticons. He then returns to Nebulos to rid the planet of the Hive's machines.

Blurr and Haywire had a single page biography printed in issue #7 of the Dreamwave Productions Transformers: More Than Meets The Eye comic series. 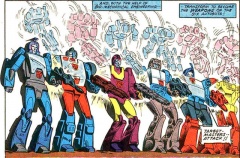 Haywire first appeared in issue #4 of the Marvel Comics Headmasters comic in a story called "Brothers in Armor!!" where he volunteered to be binary bonded to Blurr as his Targetmaster partner. The Autobots then fled Nebulos for Earth in an attempt to lure away the Decepticons.[1]

Although Haywire is not depicted, in issue #38 of The Transformers the Autobots and Decepticons from Nebulos arrive on Earth.

A remold of the original Blurr toy with an added Targetmaster partner Haywire and new holes to mount him in vehicle mode.

A recolor of the Power Core Combiner Mini-Con Caliburst. This toy is meant to be used with United Blurr figure.

A 3D printed design done as an homage to Haywire.[2]