Guide Star is a fictional character in the GoBots series. He is a heroic Guardian GoBot introduced in 1985 who turns into a space shuttle.

Guide Star was named #8 on the list of "20 GoBots That Remind Us Why the GoBots Sucked So Incredibly Hard" by Rob Bricken on gizmodo.com in 2013.[1]

Like most GoBots, Guide Star has numerous abilities because of robotic body. He can survive in space and is super-humanly strong and tough. He can fly in robot mode and project energy blasts from his hands. His body heals quickly when supplied with energy. He can turn into a space shuttle.

Although gentle and peaceful by nature, Guide Star will fight the Renegades... if necessary. But, he would rather outsmart them by using his remarkable computer knowledge. Guide Star's mission is to guide the Guardians through the darkness of space.

Although Guide Star and his companion Wendy's exclusives did not appear in the Challenge of the GoBots animated series, they did appear together in a 1985 commercial for Wendy's restaurant.[2]

In his Fun Publications 2015 Facebook series Renegade Rhetoric, Cy-Kill chronicled his return to "Level 1", his home universal stream, just as the Guardians were staging an attack on Rogue Star. Cy-Kill and his Renegade recruits from Axiom Nexus joined Fitor, Spoons and Stretch in repelling an attack by Courageous, Leader-1, the Guardian Command Centers and the new Guardian Academy graduates Beamer, Guide Star and Sky Fly. During the battle Monsterous was able to best Courageous and tore though the Command Centers, but a ploy from Leader-1 tricked Cy-Kill into unleashing a massive blast which struck Monsterous, shattering the combiner into his components.[4] 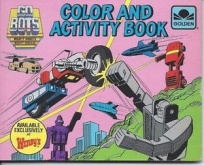 Guide Star appears in the 1986 Golden Press story The Sea Vaporizer. In the story Guardian Command Center is stationed on Earth's moon as Beamer plays games on the space scanner. An alert sounds and Leader-1 discovers the Earth is being enveloped by a steam cloud. He sends Guide Star to investigate. Guide Star discovers a beam of light that is boiling Earth's oceans and follows it into space where they discover the Renegade GoBot ship Thruster, but contact with Guide Star is cut off. Leader-1 takes up the investigation, and Cy-Kill uses a space mirage projector to conceal his presence. Leader-1 works past the mirage to discover a space station where Cy-Kill, Crasher and Cop-Tur are using a giant lenses to focus the sun's rays into a beam to boil away Earth's oceans, leaving the planet uninhabitable by humans. Cy-Kill attempts to blast Leader-1 out of the sky, but Leader-1 is able to neutralize the beam with a blast of his own. Cy-Kill sends Pow Wow and Crasher to attack Leader-1. They attempt to ram the Guardian, but Leader-1 avoids the attack causing the two Renegades to hit each other. Leader-1 frees Guide Star and deflects an attack by Cy-Kill, blowing out one of the Renegade leader's tires. The beam stopped, the oceans of the Earth are saved.[5]

Guide Star and Sky Fly were among Leader-1's troops in the 1985 story "Moonstrike", a comic strip published on a Wendy's Kids Meal box. In the story the Guardians and Renegades battle on Earth's moon. Cy-Kill threatens to shoot Leader-1 with a magnetizing ray gun. Guide Star spots a falling meteor and deflects to hit Cy-Kill. Their leader damaged, the Renegades retreat to Thruster.

A new mold. Turns from robot to space shuttle. A Wendy's restaurant exclusive.