Green Baron is a fictional character in the Micronauts series. He combines with his horse Pegasus to form a centaur.

Green Baron was featured in the 2005 Micronauts Revolution DVD digital comic by Eagle One Media which was based on the first 5 issues of the Image Comics Micronauts comic series. 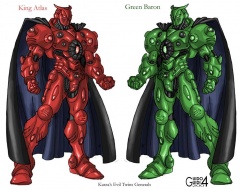 Green Baron, Lantaurion, King Atlas and Pegasus appeared together in a 1980 Micronauti commercial by Gig.[2]

This figure uses the glider pack from Space Glider and the basic body design from Micro Steel Jeeg.