Gattai Sauer is a fictional character from the Machine Robo series introduced in 1986. He the the combined form of the heroic Fossil People.

Gattai Saurer is the gigantic dinosaur-like combined form of the Fossil People: Header, Abarar, Leggar and Taildar. He is the guardian of the Dragon Sword. Like most Rock People he is probably immune to the effect of acid and magnetic fields which adversely affect metal mechanoids. 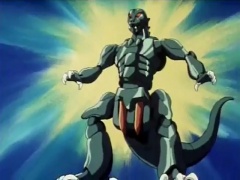 In Machine Robo: Revenge of Cronos episode 40, "Secret Valley of the Fossil Men", Gattai Saurer was discovered to be the guardian of the Dragon Sword. Battlerock welcomed Gattai Saurer into the Battle Base forces when he was invited by Rom Stol to join them.[1]

A new mold by Bandai. Turns from giant to four rock people.
This toy was also released as Rock Lords Fossilsaurus.