Difference between revisions of "Force Commander"

Force Commander is a fictional character in the Micronauts series introduced as a toy in 1977. He became a comic character in 1979.

Force Commander is an (often) heroic character in the Micronauts series. He combines with Oberon to form a centaur.

Force Commander appears in the backgrounds on the Antron and Membros package art.

The Force Commander toy was designed by Iwakichi Ogawa and was filed for US patent in 1976.[1]

Force Commander was developed by Mego using the design of the Takara Steel Jeeg toy, but recolored with a new head.

A 1978 promotional photo of a Force Commander prototype by Airfix depicts him as all-white, no red, although the toy they released was identical to the Mego version.

Force Commander was released in Greece by El Greco under the name Super Commander.

One concept considered by Palisades Toys was an 3 3/4 inch tall Force Commander which had additional magnetic armor which attached to him.

In 2012 ATR Hobby made a set of custom figures called Flight Commander which were inspire by Force Commander.[2]

In 2018 several parts for Force Commander were released on Shapeways by Mathew Robert Ignash. 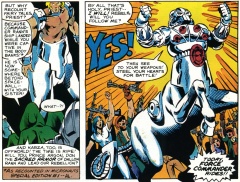 Force Commander is a heroic character in the Marvel Comics Micronauts series. Prince Argon was captured by Baron Karza and experimented on by the mad Baron. Gaining a new centaur form he broke out of captivity with Slug and helped lead a rebellion against the Baron by taking the identity of the Force Commander.

After the death of Baron Karza the Baron's mind took over Argon's body.

In issue 49 Prince Argon's body was torn apart as Baron Karza returned, reborn from within Argon.

When Marvel lost the license to Micronauts it included losing the rights to Force Commander, and he has not appeared again the Marvel Universe.

In the IDW Publishing Micronauts Force Commander is portrayed by Baron Akai Daigon, the Minister of Science.

In issue 6 Daigon took on his centaur form while combating Baron Karza. Daigon was killed.

Force Commander, Oberon, Baron Karza and Andromeda appeared together in a 1980 Italian Micronauti commercial by Gig.[4]

A remold and recolor of the Takara Steel Jeeg toy with a new head.
Can combine with Oberon to form a centaur.

A release of the toy in Europe by Airfix.

A release of Force Commander in Greece by El Greco with a new name. Comes with 4 sets of fists, 3 bopper missiles, two large cone missiles and a black version of Emperor's Galactic Sword.

A release of the Mego toy in Canada in English/French packaging by Grand Toys.

Released near the end of Palisades Micronauts run. Came in white, clear and translucent red color variants. This was originally slated as Toys R Us store exclusive but when the toy retailer rejected the line, it status became uncertain. Palisades decided not to abandon Force Commander and released him as their own exclusive via Palisades Fan Club.
The white Force Commander was packaged by mistake inside a Baron Karza box.

A small run of custom made figures by ATR hobby. This figure uses the glider pack from Space Glider and the basic body design from Micro Steel Jeeg.