Flarestrike is a fictional character and third-party Transformer homage to Sunstorm made by Play With This Too.

Flarestrike is part of the Lost Protectors series. He is a member of the Striker Fleet and leads Cloudstrike and Faststrike in hunting down Jetstrike. He has powerful fire based powers, is immune to most fire and heat damage. He wears an Aegis armor which is capable of interplanetary flight thanks to its Cosmoglider wings, which can also be changed into Cosmoshield that can deflect almost any attack. His Battle Shroud mask protects his hearing and vision from overload by enemy attack. His weapons include a Strike Scepter and a Megaton Mace. He wears a Babel Bracer which translates all languages and Tachyon Telegraph which can send and receive transmissions with an interplanetary range.

He has a Tech Drone Squire named R-Tire to turns into a jet.

Flarestrike's design is based on the shape of Pretender Starscream, but with the colors of Sunstorm.

In August 2015 Play With This Too released images of prototype parts for Jetstrike and a color render of Flarestrike, announcing it would be part of their second Kickstarter campaign.

Flarestrike was one of the ten initial figures available as a reward for the unsuccessful Boneyard & Jetstrike Action Figures Kickstarter campaign, which began in September 2015.[3]

Mathew R. Ignash invented the title Regent of the Stellar Wave, named the Strike Scepter and suggested the name R-Actor for the Tech Drone who would become R-Tire.

The Cybercast podcast for November 1st, 2014 talked about Bloodbath, Flarestrike and Goldminer in the news.[4]

The [email protected] podcast for November 1st, 2014 discussed the Ancient Astronaut, Bloodbath, Boneyard, Desolataur, Flarestrike, Jetwash and Head Shots Vol. 1 through 3 in the news. They said Xando looks like a G.I. Joe alien and talked about Aaron Archer and Simon Furman joining Play With This Too.[5]

Rik Alvarez was interviewed by Charles and Candice in the November 25th, 2014 episode of the Super Epic Podcast Theater. In it they talk about Candice joining the Play With This Too team, her Head Shots and the art of Jetstrike she is doing. They mention the toys for Bitemark, Catastropheles, Flarestrike, and the Mighty Muscules.[6] 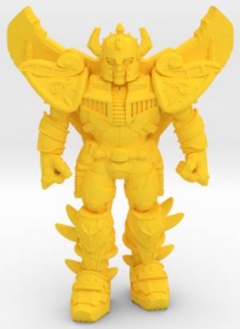 Jetstrike 35mm figure from Prize Inside in yellow as Flarestrike

Flarestrike is a member of the Striker Fleet. He wears a living Aegis battle suit powered by the primal forces of the universe. It grants him enhanced strength, durability, longevity and the ability the fly, as well as having numerous weapons. His suit also provides ultravioilet vision, breathable air and protection from harsh environmental conditions including under water and the vacuum of space. He has a Tech Drone squire named R-Tire who turns from robot to jet.

A 1:48 scale figure of Jetstrike by Prize Inside. Available on their Shapeways store in a variety of colors. This version of the figure has Boneyard style shoulder pads.[8]

A face for Titan Masters that looks like Jetstrike's human head in helmet by Prize Inside. Available on their Shapeways store in a variety of colors.[9]

A face for Titan Masters that looks like Jetstrike's robot head by Prize Inside. Available on their Shapeways store in a variety of colors.[10]