Difference between revisions of "Emperor (Micronauts)"

For other uses, see Emperor.

The Emperor is a fictional character from the Micronauts series introduced in 1980. He did not appear in Micronauts fiction until 2016.

The Emperor was designed to combine with Megas to form a centaur.

The Emperor toy was designed by Iwakichi Ogawa and was filed for US patent in 1976.[1]

Emperor was released in 1980 by Lion Rock and Gig.

In 2002 Palisades released a set of Emperor and Megas.

Concept art for a new version of the Emperor was done by Dave Waugh as part of Palisades wave 3, although the figure was never produced.[2]

Concept art for a new version of the Emperor was done by Will Jones as part of Palisades wave 3, although the figure was never produced.[3]

ATR Hobby released a custom figure called Overlord which were inspire by the Emperor.

In 2018 Mathew Robert Ignash release parts for Emperor on Shapeways. 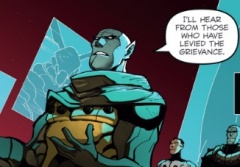 The Emperor in Micronauts volume number 4 by IDW Publishing

The Emperor appeared in the 2016 Micronauts series by IDW Publishing.

The Emperor appeared in Micronauts number 4 by IDW Publishing.

A remold and recolor of Baron Karza. Contains glow-in-the-dark parts.

Released as a set in a variety of colors including black/gold, translucent green/silver and white/purple.