Difference between revisions of "Devilrock"

Devilrock (also called Clay) is a fictional character from the Machine Robo series introduced in 1986. He is a (usually) evil member of the Rock People who works for the Gandora.

Devilrock (formerly Clay) is an evil member of the Rock People who works for the Gandora as commander of the other evil Rock People. He often operates with fellow evil Rock People Doublerock and Geigerrock. He can turn into a large space rock and if shattered he can reform. He can emit corrosive gas from his shoulders, fly, teleport and pass though solid soil and rock with ease. He is immune to acid. Because of his mechanoid nature, Devilrock does not need to breath oxygen. He stands 6 feet 10 inches tall and weighs 1.05 tons. His weapon of choice is his Club Deal which can fire his Beta Beam, but he sometimes carries a sword or a shoulder mounted missile launcher. He occasionally pilots a Rock Commander craft.

If because of the personality and the ability of their own desire, villainy superman to any despicable thing. Most high hardness among the rock superman, attacks using the hard body is tremendous destructive power. Space Kenpo also good at, but there are many foul technique. From both shoulders to fire the corrosive gas. 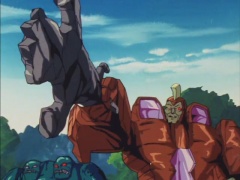 Devilrock first appeared as Clay in Machine Robo: Revenge of Cronos episode 20, "The Man From Gandora". He and his partner Gevlar (aka Geigerrock) were sent by Gades to destroy the Rock People ruins near Korora so they could uncover an energy source. The local Rock People fought back by attacking them with bombs. The bombs forced him to seek shelter in a cave where he was attacked by Iron Eater plants. He was discovered by Reina Stol, who was also trapped in the cave. Clay cut off his own leg to help her escape using it's jet booster. She returned the favor by getting her brother and friends to rescue him. After being repaired by Ambulance Robo at a nearby hospital, Clay escaped before the local Rock People revealed that he was with the Gandora. He briefly rejoined his partner Geigerrock Gevlar on their mission, killing two Rock People, but when Reina rushed onto the battlefield he sacrificed himself to save Reina from Gevlar's Alpha Beam. After he died he was given an honorable funeral by Rom Stol and his companions.[1]

Devilrock, Doublerock and Geigerrock returned in episode 21, "Angel of the Mind, Vikung-Fu - Protect". Devilrock had been returned to life, now a loyal member of the Gandora with none of the Clay personality remaining. He was among the Gandora forces that took control of the population of Cleo City. The evil Rock People were attacked by Rom Stol, but he was quickly overpowered with Wiseman's control powers. Although Rom and his companions were temporarily subdued by Wiseman, once they were freed Rod Drill tackled Doublerock and threw him into his two fellow rock Rock People. Blue Jet slashed the three evil Rock People with his sword. Once they three realized the people of the city were free and fighting back, they retreated.[2] 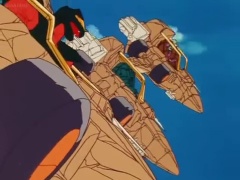 Devilrock appeared in episode 24, "Gather All Machine Robo". Devilrock and Geigerrock ambushed Rom just before he made it to Yamalin City, but he fought them off. Later Devilrock, Doublerock and Geigerrock followed Kendo Robo into the desert in his quest to recover ammunition for his city.[4]

In episode 27, "The Magic Mountain Knight Maskrock" Devilrock, Doublerock and Geigerrock spied on the team lead by Rom Stol on their way back to Yamalin City.

In episode 28, "Tough Trailer - 10 Seconds to Detonation", Devilrock and Geigerrock were part of a Garudi lead Gandora forces who attacked the Yamalin City computer center by sneaking inside the city in Tough Trailer's trailer.[5]

Devilrock, Doublerock and Geigerrock appeared in episode 30 "Spew Fire, Big Blaze Cannon". The three evil Rock People fought Tough Trailer and Reina Stol, but Devilrock ordered his people to retreat when Pro Truck Racer arrived to help his brother and shot one of the heads off Doublerock.[6]

In episode 31, "The Curse of the Demon Sword Medusa", Battle Robo and Skyline Robo retreated into the desert after being caught in a Gandora trap. The pair were ambushed by Devilrock and Doublerock, but were saved by Tough Trailer.

In episode 35, "The Secret of the Jewel People", Devilrock and Doublerock pursued Magnarock until Rom and Pro Truck Racer intervened. He was part of the force lead by Diondora that attempted to kidnap Rubyman, but failed.[7]

Devilrock appeared in episode 42, "Vikung-Fu - Cry of Anger", where he, Geigerrock and Sandrock were among the crew of the Varigale-X.[9]

In episode 43, "Mighty Fortress, Heavenly Sword - Jet Don't Die!", Devilrock among the crew of the Varigale-X when it was attacked by the Battle Base.

Devilrock last appeared in episode 44, "Cronos' Last Battle". He appeared among the surrendering Gandora troops once their mothership was overtaken.[10]

Note: In some English subtitles of the series Devilrock is called Demon and Clay is called Guri. Devilrock voice actor Hideyuki Umezu also provided the voice of Joshua Joyce in the Japanese dub of Transformers: Age of Extinction.

Turns from robot to rock. Comes with his Club Deal weapon.
Shares a mold with Tonka Rock Lords Magmar.