Difference between revisions of "Cut-Up (Starriors)"

For other uses, see Cut-Up.

Cut-Up is a fictional character from the Starriors series in 1984. He is a heroic member of the Protectors and has a chainsaw in his chest.

Protectors are programmed to rebuild civilization so that structures, facilities, and ecologies would be established and ready for use upon man's return. Wastors are a humanoid series of Starrior, roughly the same height as an adult human, though somewhat bulkier.

Cut-Up: Volatile, wants to be able to turn his chest saw on his enemies.

Cut-Up appeared in Starriors Tunnel of Doom Odyssey I published by Peter Pan. The group picture of the cast on the back of the book incorrectly labels him as Sawtooth. 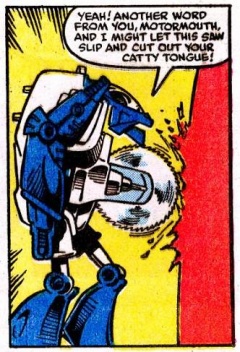 Cut-Up was a major character in the Starriors limited series by Marvel Comics.

Cut-Up was featured in the 2016 Ask Vector Prime story Echoes and Fragments, set during the events of The Transformers: The Movie. The manipulations of the evil Gong and Sideways resulted in various GoBots, Rock Lords and Starriors swapping places with characters during the events of that film. Cut-Up took the place of Arblus in the story, being captured by the Master Renegade on the planet Antares III, put on trial and executed.[1]

Cut-Up appears in the animated segment of several 1984 Starriors commercials where he battles Deadeye.[2]