Cop-Tur the Genius is a fictional story in the Transformers: Renegade Rhetoric series episode 15. Written in 2015, it retroactively took place in an unaired second season of the Challenge of the GoBots animated series.[[1]

The following was first posted on the Ask Vector Prime Facebook page on October 17th, 2015.[2] 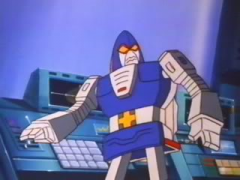 Cop-Tur in Challenge of the GoBots

Cy-Kill: It wasn't long after that Sky-Jack intercepted secret transmissions between UNECOM and Leader-1's Command Center detailing a new invention designed to boost intelligence. I sought to appropriate it for myself, but it accidentally was used on Cop-Tur. His brief stint as a super-genius was taxing to us all; I suspect even he was relieved when he returned to normal.

Louis Sun: Did Cop-Tur pull any particularly exasperating stunts while he was a super genius?

Cy-Kill: The problem with Cop-Tur the genius was, fundamentally, he was still Cop-Tur. One expects a certain amount of bumbling in a brute like him, and one compensates for it. But when a brilliant spatio-temporal physicist slips and accidentally pulls the activation switch while still inside my own Thruster and turns on the Reality Destablizer he created, that is another matter entirely. I wonder if the Gluon/Boson Inverter he a slipped and shot me with has anything to do with my current predicament here in Axiom Nexus.