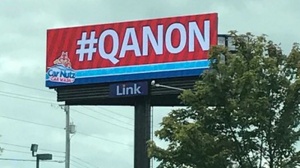 He had a history of right-wing militancy, prior to his January 7th, 2021 arrest on gun charges, following the unsuccessful attempt by extremists to seize the US Capitol building.

In 2018 Meredith paid for a roadside billboard, in Atlanta, advertizing the QAnon movement.

In July 2019 Meredith brandished an assault rifle at marchers at a Black Lives Matter protest.

Meredith set out on a cross-country trip to Washington DC, planning to arrive on January 5, 2021, the day before Vice President Mike Pence would formally read out the official results from the US Electoral College, formally confirming Joe Biden as President-elect.

On January 7, 2021, law enforcement officials arrested Meredith after he travelled to Washington, DC, to participate in the seizure of the

They found that he was heavily armed. They report a review of his phone and computer s He is most notable for brandishing an assault rifle, on social media, while announcing that he would live broadcast himself shooting Speaker of the House Nancy Pelosi, in the head.