The sentence employs three distinct meanings of the word buffalo:

File:Buffalo sentence diagram.svg
Reed-Kellogg diagram of the sentence
File:Bison fight in Grand Teton NP.jpg
Bison engaged in a contest of dominance. This sentence supposes they have a history of such bullying with other buffalo, and they are from Buffalo, New York. 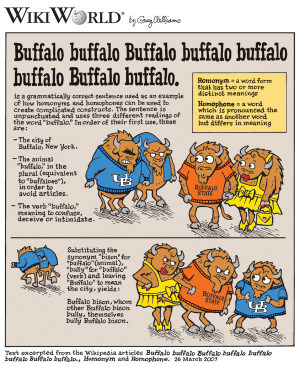 A comic explaining the concept

The sentence is unpunctuated and uses three different readings of the word "buffalo". In order of their first use, these are:

The sentence is syntactically ambiguous; however, one possible parse (marking each "buffalo" with its part of speech as shown above) would be as follows:

Thus, the parsed sentence reads as a claim that bison who are intimidated or bullied by bison are themselves intimidating or bullying bison (at least in the city of Buffalo – implicitly, Buffalo, NY):

Thomas Tymoczko has pointed out that there is nothing special about eight "buffalos"; any sentence consisting solely of the word "buffalo" repeated any number of times is grammatically correct. The shortest is "Buffalo!", which can be taken as a verbal imperative instruction to bully someone ("[You] buffalo!") with the implied subject "you" removed,[2]:99–100, 104 or as a noun exclamation, expressing e.g. that a buffalo has been sighted, or as an adjectival exclamation, e.g. as a response to the question, "where are you from?" Tymoczko uses the sentence as an example illustrating rewrite rules in linguistics.[2]:104–105

The idea that one can construct a grammatically correct sentence consisting of nothing but repetitions of "buffalo" was independently discovered several times in the 20th century. The earliest known written example, "Buffalo buffalo buffalo buffalo", appears in the original manuscript for Dmitri Borgmann's 1965 book Language on Vacation, though the chapter containing it was omitted from the published version.[3] Borgmann recycled some of the material from this chapter, including the "buffalo" sentence, in his 1967 book, Beyond Language: Adventures in Word and Thought.[4]:290 In 1972, William J. Rapaport, now a professor at the University at Buffalo but then a graduate student at Indiana University, came up with versions containing five and ten instances of "buffalo".[5] He later used both versions in his teaching, and in 1992 posted them to the LINGUIST List.[5][6] A sentence with eight consecutive "buffalo"s is featured in Steven Pinker's 1994 book The Language Instinct as an example of a sentence that is "seemingly nonsensical" but grammatical. Pinker names his student, Annie Senghas, as the inventor of the sentence.[7]:210

Neither Rapaport, Pinker, nor Senghas were initially aware of the earlier coinages.[5] Pinker learned of Rapaport's earlier example only in 1994, and Rapaport was not informed of Borgmann's sentence until 2006.[5] Even Borgmann's example may not be the oldest: computational linguist Robert C. Berwick, who used a five-"buffalo" version in a 1987 book,[8]:100 claims he had heard the sentence as a child ("before 1972, to be sure") and had assumed it was part of common parlance.[5]

Versions of the linguistic oddity can be constructed with other words which similarly simultaneously serve as collective noun, adjective, and verb, some of which need no capitalization (such as "police").[9]

Listen to this article (info/dl)
200px