Bitemark is a fictional character and toy made by Play With This Too. He is an evil Vampire Cosmic who is loyal to King Coldfang.

Bitemark is an original fictional character created by Play With This Too as part of their Lost Protectors series. Bitemark is an evil Vampire Cosmic loyal to King Coldfang. He has all the powers common to the Vampires Cosmic, including enhanced hearing, a healing factor, night vision, superhuman durability, longevity and strength, the ability to walk up walls and mind control over those he has bitten. He carries a Howler Scythe weapon and has a demon imp possessed Tech Drone companion named D-Kay who turns into a space ship or shield and has two Ironspike Cannons. He travels through space in his Starcophagus.

Bitemark's head and scythe design were somewhat influenced by Blood and Bomb-Burst, while his body and Tech Drone were influenced by Duros and Skullgrin.

Bitemark and D-Kay were designed by Steve Redinger. D-Mon was modeled by Peer Brauner.

The closed hands for Bitemark were designed by Albie Lim.

Bitemark was announced in November 2014. Play With This Too posted on their Facebook page that the toy would look even better with the red Skull-FCKR head on it.

In February 2015 Play With This Too released images of the prototype for Desolataur, which included parts used on Bitemark.

Play With This Too started a Kickstarter crowd funding campaign on February 27th, 2015. It offered several figures as backer rewards, including Bitemark, and had a funding goal of $80,000. The campaign ended short of its goal with only $71,625 pledged.[2]

In June 2015 Play With This Too announced they would be doing another Kickstarter. Bitemark would not be among the figures offered in this Kickstarter, and it was being reworked to offer more articulation.[3]

In March 2017 Prize Inside released three versions of his Nightmare Scythe on their Shapeways store.

The Cybercast podcast for November 15th, 2014 talked about Bitemark with D-Kay and the crowd funding exclusive recolor of the Head Shots Vol. 1 in the news.[4]

The Good Morning, Cybertron! podcast for November 17th, 2014 discussed the reveal of Bitemark with D-Kay and the crowd funding exclusive Head Shots Vol. 2 in the news.[5]

The Repacked Podcast podcast for November 18th, 2014 discussed Bitemark with D-Kay and Head Shots Vol. 1 in the news. They said Skull-FCKR reminds them of Diablo and Terribull reminded them of Horri-Bull and the hosts wanted to buy them now. They also discussed Christopher Dahlberg joining the Play With This Too team and an upcoming interview with Play With This Too.[6]

Rik Alvarez was interviewed by Charles and Candice in the November 25th, 2014 episode of the Super Epic Podcast Theater. In it they talk about Candice joining the Play With This Too team, her Head Shots and the art of Jetstrike she is doing. They mention the toys for Bitemark, Catastropheles, Flarestrike, and the Muscules.[7]

The Cybercast podcast for January 31st, 2015 talked about D-Kay, Desolataur and Head Shots Vol. 7 in the news.[8] 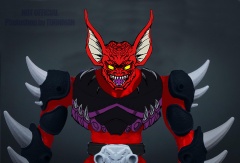 The most loyal (or perhaps the only loyal) servant of King Coldfang, Bitemark seeks his master's favor by devoting his unlife to the hunt for Bloodbath. Traveling the galaxy in his Starcophagus, he longs for the day he delivers Bloodbath's severed head to his king. A born toady, Bitemark lies, grovels and feigns weakness constantly, keeping his eventual victims off-guard and unprepared for his attack. When he walks a world with one or more full moons he gains the ability to dissolve into a crimson mist that can surround an opponent and drain their life essence.

D-Kay is an imp spirit possessing a Tech Drone. He turns from robot to space ship or shield, and can turn into weapons for his partner of Bitemark. He travels in his Starcophagus.

A 2.6 inch long Nightmare Scythe by Prize Inside. Available on their Shapeways store in a variety of colors.[10]
This mold is the same as the Howler Scythe and Scythe-Winder.

A 4.6 inch long Nightmare Scythe by Prize Inside. Available on their Shapeways store in a variety of colors.[11]
This mold is the same as the Howler Scythe and Scythe-Winder.

A 4.4 inch long Nightmare Scythe by Prize Inside. Available on their Shapeways store in a variety of colors.[12]
This mold is the same as the Howler Scythe and Scythe-Winder.