Aerial view of the Parwan Detention Facility (PDF) in 2009.

The Parwan Detention Facility (PDF), also called the Bagram Theater Internment Facility, is a United States-run prison located next to Bagram Airfield in the Parwan Province of Afghanistan. It was formerly known as the Bagram Collection Point. While initially intended as a temporary location, this facility now has lasted longer and accumulated more detainees than the Guantanamo Bay detention camp.[1] As of early June 2011 the Obama administration holds 1700 prisoners at the military base while there were previously about 600 prisoner under the Bush administration. None of the prisoners received POW status.[2] An Memorandum of Understanding to transfer control of the Parwan Detention Facility from the United States to Afghanistan was signed on March 9, 2012.[3][4][5] According to Al Jazeera the agreement "will put an Afghan general in charge of Parwan [...] within days, [...] but will also give a six-month window to gradually transfer detainees to Afghan oversight. According to the document, the US will continue to provide logistical support for 12 months and a joint US-Afghan commission will decide on any detainee releases until a more permanent pact is adopted."[5]

The treatment of inmates at the facility is under scrutiny since two Afghan detainees died in the 2002 Bagram torture and prisoner abuse case. These incidents led to prisoner abuse charges against several American troops. Concerns about lengthy detentions also have drawn comparisons with U.S. detention centers in Guantanamo Bay on Cuba and Abu Graib in Iraq. Part of the interment facility is called the Black jail.[2][6] 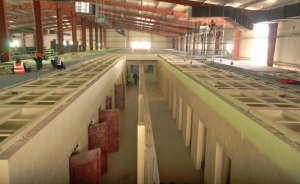 Construction of the new detention facility 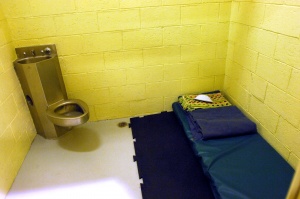 Inside view of a cell after completion in 2009 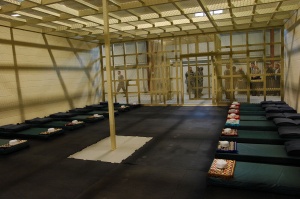 Inside the multi-bed room

During the Soviet occupation of Afghanistan the Red Army built Bagram Airfield.[7][8][9] The airfield included large hangars that fell into disrepair after the Soviets left.

When the US military and their allies ousted the Taliban, US forces took possession of the former Soviet base. The US military didn't need the volume of hangar space, so a detention facility was built inside the large unused hangars. Like the first facilities built at Guantanamo's Camp X-Ray, the cells were built of wire mesh. However, only captives held in solitary confinement have a cell of their own.[10] The other captives share larger open cells with other captives.

According to some accounts, captives were provided with shared buckets to use as toilets, and did not have access to running water.[11] Although captives share their cells with dozens of other captives, there are also reports that they are not allowed to speak with one another, or even to look at one another.[10]

During an interview on PBS, Chris Hogan, a former interrogator at Bagram, described the prisoner's cells in early 2002.[12]

According to an article by Tim Golden, published in the January 7, 2008 issue of the New York Times, captives in the Bagram facility were still being housed in large communal pens.[13]

Permanent replacement facilities for the original temporary facilities constructed in 2001 were completed in September 2009.[14] According to The Nation transfer of the 700 captives to the new facilities will begin in late November 2009 completed by the end of 2009. Brigadier General Mark Martins, Bagram's commandant, told reporters that the facility had always met international and domestic standards.

Although the new facility is near the previous facility, it DoD sources sometimes refer to it as the Parwan facility, as if it had no link to the original Bagram facility.[15]

At least two deaths have been verified in the last decade: captives are known to have been beaten to death by GIs manning the facility, in December 2002.[16]

Captives who were confined to both Bagram and the Guantanamo Bay detention camp have recounted that, while in Bagram, they were warned that if they did not cooperate more fully, they would be sent to a worse site in Cuba.[17][18] Captives who have compared the two camps have said that conditions were far worse in Bagram.[19]

In early 2012, Afghan President Hamid Karzai ordered that control of the Parwan Detention Facility be handed over to Afghan authorities after some inmates complained of being strip searched and put in solitary confinement.[21][22][23]

When the GIs implicated in the December 2002 homicides were about to face court martial, four prisoners escaped from Bagram. At least one of these was a prosecution witness, and was thus unable to testify.[8][24]

The George W. Bush administration avoided using the label "prisoner of war" when discussing the detainees held at Bagram, preferring to immediately classify them as "unlawful enemy combatants". This way, it is not necessary under the Geneva Conventions to have a competent tribunal determine their classification. (In previous conflicts such as the Vietnam War, Army Regulation 190-8 Tribunals determined the status of prisoners of war.)

The administration also initially argued that these detainees could not access the US legal system. However, the United States Supreme Court's ruling in Rasul v. Bush confirmed that captives in US jurisdiction did indeed have the right to access US courts. Rasul v. Bush determined that the Executive Branch did not have the authority, under the United States Constitution, to suspend the right for detainees to submit writs of habeas corpus.

Another consequence of the Supreme Court's ruling in Rasul v. Bush was the establishment of Combatant Status Review Tribunals to review and confirm the information that initially led each captive to be classified as an enemy combatant. The Department of Defense (DoD) convened these tribunals for every captive in Guantanamo Bay, but they did not apply to Bagram. The current legal process governing the status of Bagram captives is the Enemy Combatant Review Board, described by Eliza Griswold in The New Republic:

On February 20, 2009, the Department of Justice under President Barack Obama announced it would continue the policy that detainees in Afghanistan could not challenge their detention in US courts.[25]

On April 2, 2009 US District Court Judge John D. Bates ruled that those Bagram captives who had been transferred from outside Afghanistan could use habeas corpus.[26] The BBC quoted Ramzi Kassem, lawyer for one of the men:

The decision was reversed on May 21, 2010, the appeals court unanimously ruling that Bagram detainees have no right to habeas corpus hearings.[29]

On January 15, 2008 the International Committee of the Red Cross and the US military set up a pilot project to allow certain well behaved prisoners not in solitary confinement in Bagram to communicate with visitors over a videolink.[30] The ICRC will provide captives' families with a subsidy to cover their travel expenses to the video-link's studio.

According to National Public Radio a General in the United States Marine Corps Reserve recently filed a 700 page report on the Bagram internment facility and its captives.[31][32] According to senior officials who have been briefed by Major General Douglas Stone, he reports, "up to 400 of the 600 prisoners at the U.S.-run prison at the Bagram Air Base in Afghanistan have done nothing wrong and should be released." According to Daphne Eviatar, writing in the Washington Independent, Stone recommended that the USA should try to rehabilitate any genuine enemies it holds, rather than simply imprisoning them.

According to Chris Sands, writing in The National, in a leaked report General Stanley McChrystal wrote: “Committed Islamists are indiscriminately mixed with petty criminals and sex offenders, and they are using the opportunity to radicalise and indoctrinate them... hundreds are held without charge or without a defined way ahead”.[33]

According to The Guardian McChrystal wrote:[34] “There are more insurgents per square foot in corrections facilities than anywhere else in Afghanistan. Unchecked, Taliban/al-Qaida leaders patiently co-ordinate and plan, unconcerned with interference from prison personnel or the military.”

A graphic published to accompany Golden's article showed approximately 300 captives in Bagram, and approximately 600 in Guantanamo, in May 2004, and showed the reverse in December 2007.[35]

On August 23, 2009 the United States Department of Defense reversed its policy on revealing the names of its captives in Afghanistan and Iraq, including the Bagram Theater Internment Facility.[36][37] and announced that their names would be released to the International Committee of the Red Cross. In January 2010, the names of 645 detainees were released. This list was prompted by a Freedom of Information Act lawsuit filed in September 2009 by the American Civil Liberties Union, whose lawyers had also demanded detailed information about conditions, rules and regulations.[38][39]

The number of people imprisoned sharply increased under the Obama administration reaching 1700 in June 2011.[2]

On September 12, 2009 it was widely reported that unnamed officials told Eric Schmitt of the New York Times that the Obama administration was going to introduce new procedures that would allow the captives held in Bagram, and elsewhere in Afghanistan, to have their detention reviewed.[40][41][42][43][44] Josh Gerstein, of Politico, reported Tina Foster, director of the International Justice Network, and a lawyer who represents four Bagram captives, was critical of the new rules:

According to Radio Free Europe, Amnesty International's Asia-Pacific director, Sam Zia Zarifi, paraphrasing Major General Douglas M. Stone's report on the USA's detentions in Afghanistan: "pointed out that the lack of a legal structure for Bagram means that it is undermining the rule of law in Afghanistan and it has caused a lot of resentment among Afghans.".[45]