Difference between revisions of "Astro Station"

The Micronauts Astro Station (Conning Station in Japan) is a fictional vehicle in the Micronauts series introduced in 1976.

The Astro Station is a vehicle in the Micronauts series.

The Conning Station was released by Takara in 1975.

The Astro Station was released by Mego in 1976. It was also released by Airfix and Pin Pin Toys.

In 2018 several part for the Astro Station were released on Shapeways by Mathew Robert Ignash. 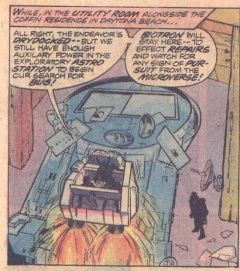 The Astro Station is one of the vehicles housed in the Micronauts ship Endeavor. The capsule included with the Station was depicted as where Commander Rann was kept in suspended animation in the story.

The Micronauts frequently traveled in the Astro Station when on Earth. It first appeared in issue 4.

In issue 48 the Bioship recreated the Astro Station, Hydro Copter and Star Searcher in it's vehicle bay from the memories of Arcturus Rann.

An Astro Station was seen among Baron Karza's fleet in Micronauts Karza number 4 by Image Comics.

In Micronauts First Strike issue 1 Acroyear, Biotron, Orbital Defender, Microtron and Space Glider fought the Dire Wraiths and traveled in the Astro Station while on Earth. They were then attacked by Rom who mistook them for Dire Wraiths.[1]

Astro Station appeared in the 2018 art series Micronauts Protectors of Inner Space by Brian Vox. It formed the Rescue Pod with Biotron and Microtron.

A European release of the toy.