Difference between revisions of "Arcturus Rann"

Arcturus Rann is a fictional character from the Marvel Comics introduced in 1979. He is the heroic leader of the Micronauts.

Arcturus Rann was a character created for the Micronauts series by Marvel Comics.

According the writer Bill Mantlo the surname Rann is a tribute to the adopted home world of DC comics Adam Strange.[1]

In 2003 Palisades released a recolor of their Space Glider done as a nod to Rann in the Marvel Comics, although because Marvel Comics owned the character they could not use the name officially, calling him "Space Commander" Space Glider.

One of the first of the space gliding Micronauts - Adventurers/explorers in suspended animation 1,000 years ago to the farthest reaches of the Microverse - Rann returned to a Homeworld vastly changed from which he knew! Yet he has spent 10 centuries telepathically probing the unknown and never much cared for the predictable, anyway!

When the Micronauts breached the space wall to escape Baron Karza they arrived on Earth, where they discovered they were about 6 inches tall compared to the native human population.

Rann continued to command the Micronauts in Micronauts: New Voyages.

While Mego retained the rights to the Micronauts character Space Glider, Marvel owns the character of Arcturus Rann. Rann continued to appear in Marvel Comics stories after the Micronauts series ended.

After the second Marvel Micronauts series ended an unnamed and unspeaking Commander Rann, Marionette, Fireflyte, Acroyear and Bug appeared in a cameo in M'ndens Bar in New Mutants number 50 in 1987.

Rann officially returned in 1998 in the pages of Alpha Flight volume 2 number 10 and 11 when Alpha Flight traveled to the Microverse and ended up on Homeworld. The Champions of the Microverse lead by Arcturus Rann fought against Baron Zybek. The group included Bug, Mary and Dexam and used the Endeavor as the based of operations. The freedom fighters and Alpha Flight defeated Baron Zybek.

Rann, Mari and Bug on the Endeavor, calling themselves the Micronauts, teamed up with Cable, Domino and Cane in defeating Psycho-Man in Cable number 37-39.

Artcurus Rann had a full biography printed in the All New Official Handbook of the Marvel Universe A to Z: Update issue 4 from 2007.

There is a fan-made mesh and skin for Arcturus Rann for the 2002 Freedom Force video game.[2] 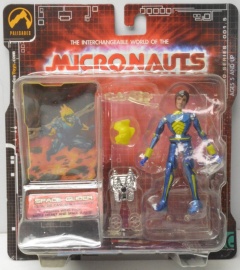 A 1:18 scale figure. Comes with a helmet, blaster, wing pack and stand.
A recolor of the Palisades Space Glider toy colored as an homage to Arcturus Rann.