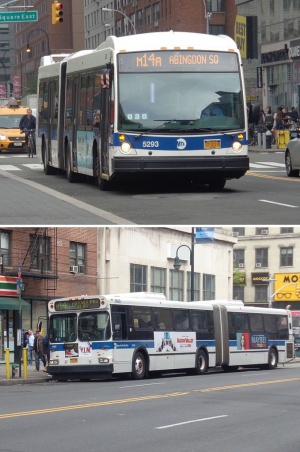 In 2019 a controversial plan would restrict a busy section of NYC's 14th Street to buses and trucks, bicycles and pedestrians.

New York City's 14th Street busway was a proposed busway that would have temporarily suspended most vehicular traffic on Manhattan's 14th Street, in favor of buses and pedestrians.[1][2][3] Congestion was already bad on 14th Street, before damage from Hurricane Sandy required the 14th Street Tunnel shutdown under the East River. The repairs require temporarily reducing New York City Subway service on the Template:NYCS trains under 14th Street.

According to Winnie Hu, a transit specialist at The New York Times, the plan was inspired by Toronto's successful King Street Pilot Project, where restriction on ordinary vehicles on a section of previously clogged King Street speeded up transit times for transit riders on the 504 King streetcar route. The Toronto experiment allowed ordinary vehicles to continue to briefly use King Street, provided they turned off at the next stoplight. The King Streetcar is the Toronto Transit Commission's busiest surface route, carrying over 70,000 trips per day.

When first proposed the busway would only have been implemented during rush hour and would have served M14 SBS buses.[4][5][6]

According to Curbed NY the plan's main opponent is Arthur Schwartz, a lawyer who lives on nearby 12th Street.[7][8] Schwartz filed several injunctions, blocking implementation of the plan.[9][10][7] According to Curbed Schwartz assembled a loose coalition of disparate special interests, beyond his wealthy neighbors. Schwartz argued that restricting ordinary vehicles from 14th Street would redirect them to neighboring streets, which would make it less safe for the mobility impaired to cross those streets.